Identity is my strength! 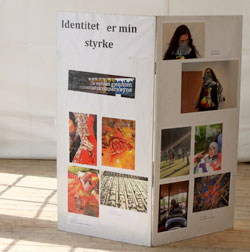 In association with this years empowerment activities, The MiRA Centre recently held a photo workshop for young girls entitled ”Identity is my strength”. Minority women and young girls in our network individually took photos and created picture series which they felt expressed their individual and unique identities. We are proud of the beautiful and creative pictures that were shown at this year’s Mela Festival. The exhibition, like the workshop, was called “Identity is my strength”.

Questions like “Who am I?” and “Where is home for me?” seek to define our personal identity and have always been important for people across cultures. Through this photo exhibit, we want to show that an individual’s identity is something one can be conscious of and proud to show to others. Everyone has the right to themselves define who they are.

Many people stopped by The MiRA Centre’s tent over the course of the three day festival and were impressed by the photos in the exhibition.

Girls define their own identity!
All of the pictures and series were accompanied by captions written by the girls who had composed and photographed them. One of the pictures, for example, showed a unique perspective on a page from the Koran and had the caption “The Koran is my meditation”.  One picture series with the commentary “Summer is the season for weddings filled with colors and joy”, had creatively captured the colors and excitement of “the big day” through photos of different wedding decorations.

Some other pictures showed happy people gathered on a football field and participating in other activities. The pictures had the description “I get my strength from family and friends “. Two pictures show a young women with her mouth covered and dressed in a t-shirt that said “Let me talk in Kurdish!” . To express ones self in ones native language is an important part of ones identity for many people. Another one of the series was called “I carry my identity”.

The photo workshop and picture exhibit was an exciting way to express the girls’ definitions of their own identities.